“My name is Adonai Sebhatu and I’m an artist born and raised in Bologna, to Eritrean parents. If I really have to say my age, just a few days ago I turned 34 years old (laugh); I’d say these are more or less all the information about me.”

What do you mean when you define yourself as an artist? What does your artworks express?

“What I want to say is that I literally create art, through the creation of paintings, the sculptures and the artistic installations. I don’t have a precise area, I often let myself be carried away from the flow of ideas that are born from single projects; in the same way I don’t like focusing on a unique technique.

I often use recycled materials, trying to give them a new life to something that otherwise would’ve been thrown away: it is an activity that I have explored since when I was a child, I’ve always been fascinated by the idea of building an object with my own hands.

I started my artistic career path quite late and self-taught, in 2012: I studied Business Economy here in Bologna but as time went by, I realized that kind of life wasn’t really meant for me.

That’s when I started to question everything and, delving into my past, I pictured myself at my little table, all busy in drawing and building up stuff.

The step was short from there, to finding myself doing the same thing I used to when I was a child, only to a bigger table. I must say that this drastic choice of change has immediately paid off, and I received positive feedback, even to my first artworks.

Since then, the challenge that I have set myself every time I try to build something is to answer the question: “How can I ensure that others are able to see the same beauty that I see in abandoned objects?”. It takes a lot of work on the different materials and their peculiarities, since each element requires specific attention and has very specific attributes.

Ultimately, art is research: of new and innovative techniques, of new insights … A work of art often leads to illusion and magic. “

In light of all this, what’s your mission?

“My opinion is that we shouldn’t care too much about the artist’s goal, what is called: mission. Art can be within anything that goes beyond pure objective functionality. For example, while in architecture we always start from a practical problem and then solve it through various style and design solutions, in art we go beyond all this, leaving aside the rational part that is inherent in each of us and which we often tend to listen too much. But if I really have to answer your question, well, I can tell you that I hope to give people opportunities, food for thought they can then decide to grasp or not, with absolute freedom.” 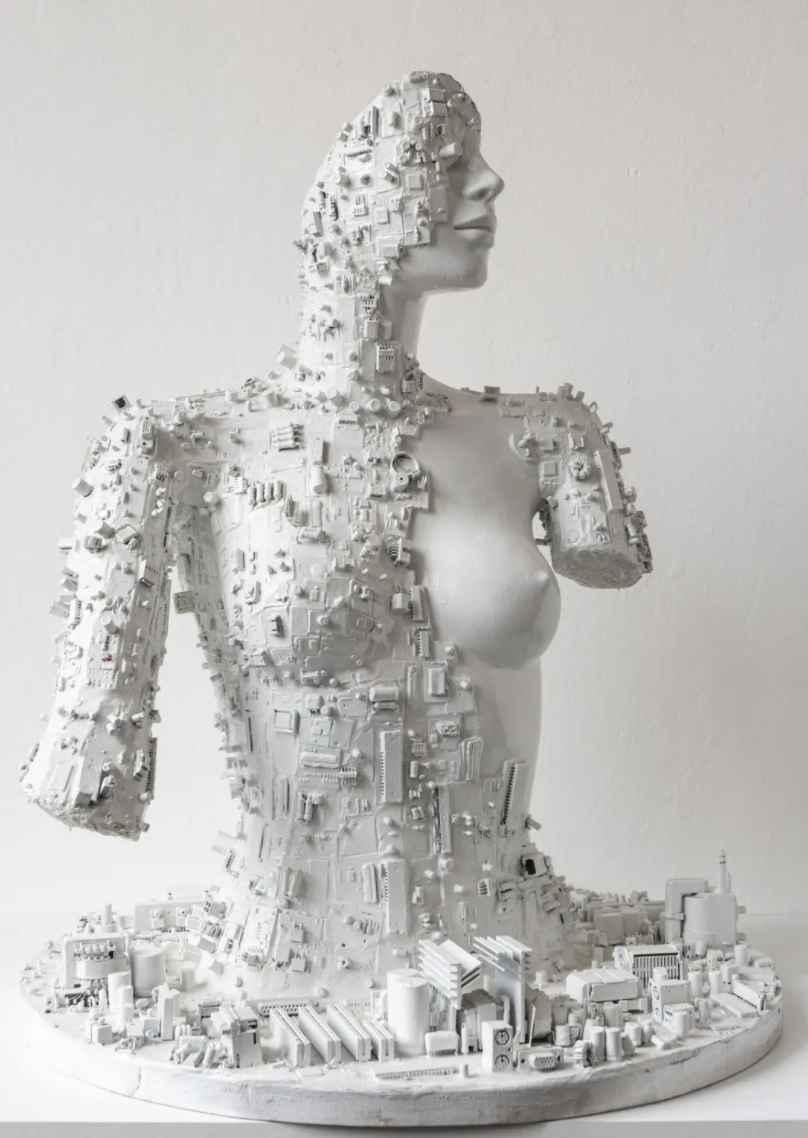 Answer accepted! Let’s stay on topic: which artists have influenced you the most?

Although I grew up artistically self-taught, I was fortunate enough to meet who would later become a great friend of mine, Luca Serio.

He has been very important in the first part of my journey, helping me to gain clarity on how to pursue my ideas: he introduced me to the classical and academic world of painting and sculpture.

Then, let’s say that I emancipated myself, and I began to take inspiration from artists such as Olafur Eliasson, Antony Gormley, Anish Kapoor… I am always fascinated by large-scale works, so much so that one day I would like to become a land artist, working directly on large spaces such as deserts or salt lakes!

By now, however, you’ve made a bit of a career for yourself: what has been your most important project?

I still consider myself an ‘up-and-comer,’ so I don’t like to hear about significance. And then today, on hold for so long, it all seems so far away….

A nice project, especially for the large size, was the one I made at the Autodromo di Imola in 2019: I used a lot of recycled electronic materials, that time trying to let my rational part speak too.

What did the installation consist of?

It was an alto-relievo more than three meters wide and two meters high, built with motherboards, computer parts, hardware… Looking at it, it looked a bit like Michelangelo’s “Giudizio Universale”, with two dummies (obviously recycled) that “came out” of the circuits and seemed to go towards each other. Then, with the help of Riccardo Mengoli, a friend who deals with project mapping, the sculpture came alive and started to move. Seeing it realized was a great satisfaction. 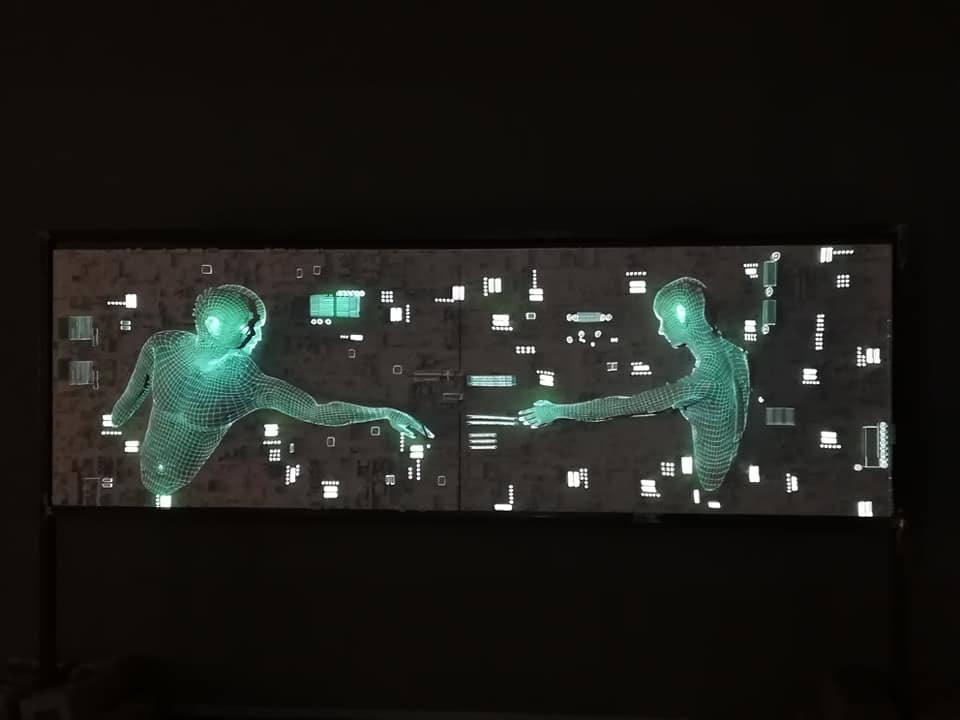 Now let’s move on to the standard questions. Why did you choose DumBO?

First of all for space. I need light and air to give life to my works and here I found everything I needed. Then, last but not least, here every day I can work side by side with many people full of ideas, inspiration, energy. There is great potential in this place, you know?

[We hear something move behind us] And who is it?

Her name is Dana, and she was given to me for adoption by a private client I was working for, creating a fresco. It wasn’t my intention to get a dog but, you know, sometimes the artist’s work can be a little lonely, and she keeps me company.

You made it, you’ve come to the crucial question: if Adonai were a song, what would it be?

I carry a heavy name, because it is the way the Jews addressed God, not being able to pronounce his real name. So there are a lot of songs that say “Pray to Adonai”, but I’ve never listened to them because I have a big ego and I might get strange ideas.

So if I had to be a song… Mmmh, tough choice. I really like rap, but if I have to choose I’ll go with jazz. Here, I’ve decided: Miles Davis!