E.]: “My name is Elisa Trento and I am a consultant in the field of cultural events and the audiovisual industry. I collaborate with several companies as a designer, curator and production manager.

In addition to this, I am President of the Shape Association, for which I deal mainly with design, and the curatorship of some of the content of ROBOT Festival, an international festival of electronic music and digital arts now in its twelfth edition.” 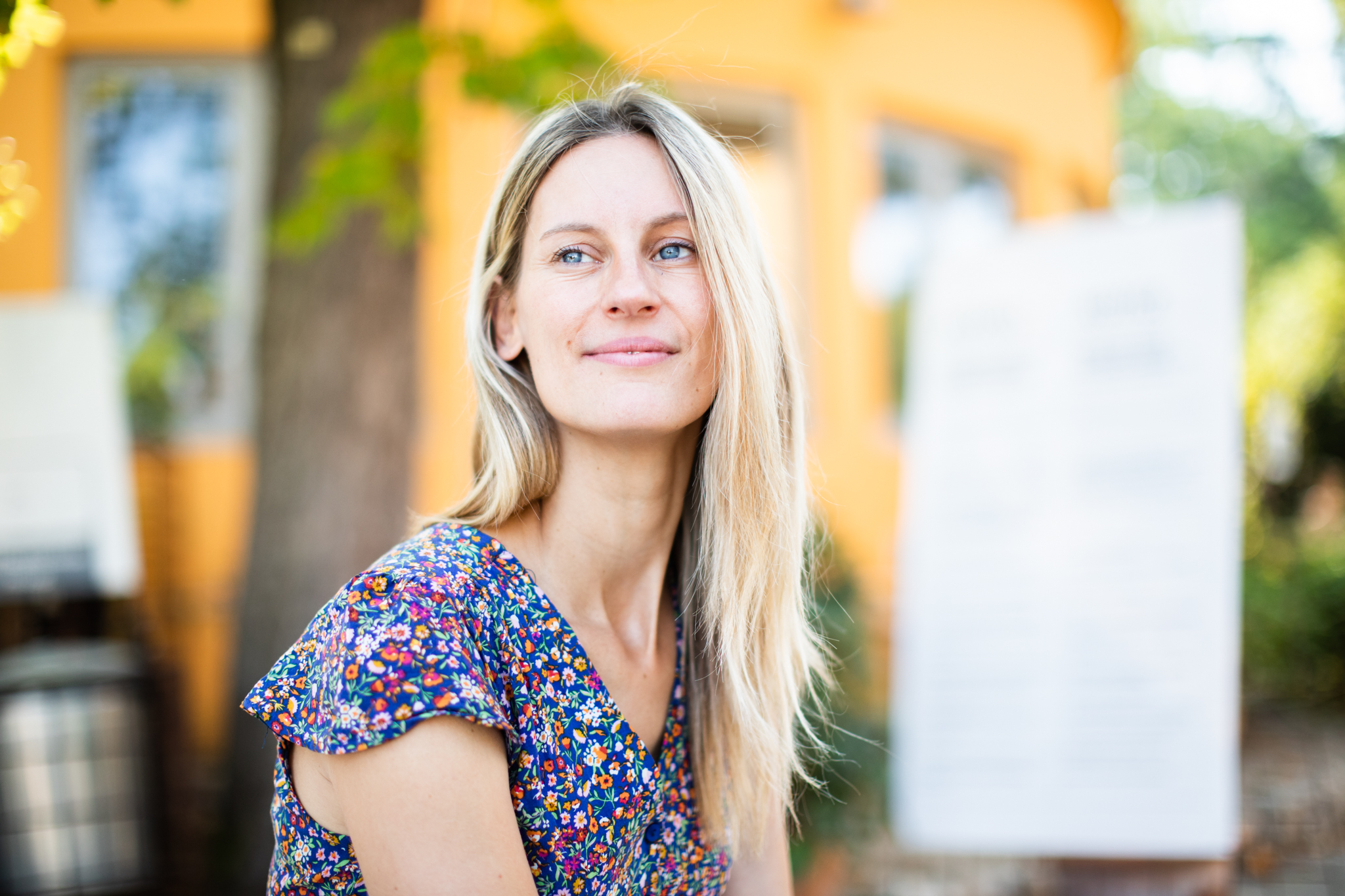 The Shape Association is one of the actors in our District: describe it to us!

E.]: “Shape is a cultural association that was founded almost twenty years ago, in 2002, and which today, thanks to the reform of the third sector, is part of the world of social promotion associations. The association works to enhance and promote initiatives linked to the world of electronic music and digital arts through unconventional activities.

Over the years, many different events have been organized in Bologna and throughout the country, always trying to make different disciplines coexist and dialogue: from music to audiovisual performances, from projections to dance, always trying to interpret and investigate the state of the art around contemporary electronic music and digital culture.

Through our activities, emerging artists have often come into contact with the most prominent names on the international scene, especially in the context of ROBOT Festival.”

Music, digital arts, festivals… What is the mission of your work?

[E.]: “Our mission is to continue to investigate our world by designing, organizing and promoting art and culture through unconventional initiatives. It is a constantly changing landscape, in which we must always try to shape new perspectives of language and fruition.

Certainly, we always try to develop new proposals and we intend to do so continuously throughout the 12 months of the year, dialoguing with the local realities and at the same time developing a network that can expand and enhance our proposals through the strengthening of some national and international networks already in place. The development of special projects in a multidisciplinary perspective through artistic exchanges, residencies and new productions is one of our main lines of programming”.

What has been Shape Association’s most important project so far?

[E.]: “Without a doubt ROBOT Festival, born in 2008 and now in its twelfth edition. Year after year, the festival has grown a lot and has seen several hundred artists perform, with up to 30,000 people attending the most popular editions.

Shape has also managed to bring several events to other Italian cities and two editions of ROBOT to the other side of the world, in Buenos Aires. Our greatest pride is to have become an important reference point for electronic music fans and professionals. The moments of stall, difficulty and reflection are certainly not lacking, but they have served to help us develop alternative projects and re-invent ourselves with new formulas and new proposals, without ever losing the focus on our greatest passion, which is music.

The Festival has always taken place in different locations of our city, as for its inaugural concert of many editions at the Teatro Comunale and then Palazzo Re Enzo, the Ex Galleria d’Arte Moderna, the Fair and nightclubs such as Link, Kindergarten … We have always “lived” the spaces of Bologna feeding virtuous collaborations with other realities of the territory.” 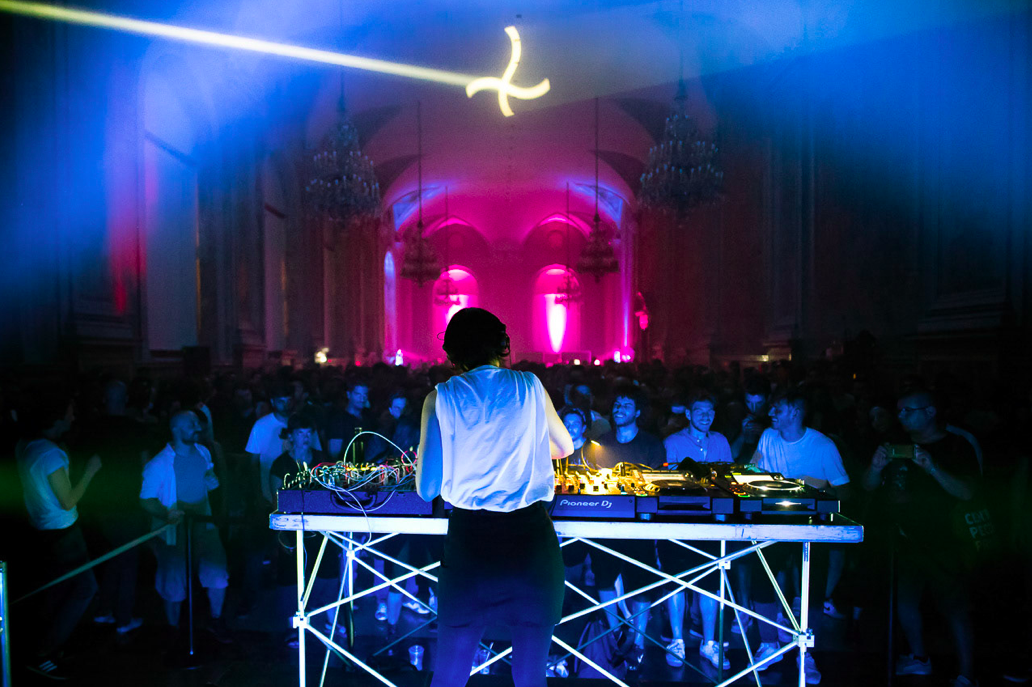 The plan for the future? If we can do any spoilers?

[E.]: “Well, you could say it’s not a spoiler anymore [laughs], because we announced the dates a few days ago! The new edition of the ROBOT Festival will be at DumBO on the weekend of June 18-20!

As Shape, we are also planning to carry out a project for new musical productions supported by the Municipality of Bologna, which will involve two important names on the contemporary Italian music scene: an artist from Bologna – Lorenzo Nada aka Godblesscomputers, beat maker, producer and DJ, and Davide Bassi aka Bassi Maestro – considered one of the fathers of underground rap in Italy, with his electronic producer project ‘North of Loreto’.

During a three days residency the two artists will work together in a DumBO room to produce new music tracks in a brand new collaboration that will be proposed to the public in a live performance by RBT. The live performance will be proposed both in presence and online with a cutting-edge streaming that will allow a creative reworking of video footage and interaction with the user.

We are also working on other important initiatives in the city of Bologna that will be announced soon. Finally, we have participated in several calls to develop our international projects, but for superstition I can not say more.”

Why did you decide to rent a DumBO space?

[E.]: “We chose DumBO because it is a space of urban regeneration with few equals, which allows us to bring new content and artistic proposals without any kind of logistical problem.

Working here, then, we can get in touch with many interesting realities such as Apparati Effimeri with whom we have already collaborated on several occasions. DumBO is an excellent ‘office’ where we can work, as well as the ideal location where to realize the next edition of ROBOT Festival in full compliance with the anti-counterfeiting safety regulations.”

Since a few days you have become the president of Associazione Shape, becoming the female face of reference for Bologna’s associations supporting electronic music and digital arts. What are the next steps?

E.]: “I am particularly proud of this position, also because I have been following Shape and ROBOT for many years now… I respect them for their great ability to reinvent themselves, overcoming obstacles and always responding to social and economic changes in the external context (not least those related to the pandemic).

Shape has renewed its working group and is now a good mix of people who have been working since “day zero” when it was founded, together with new people who have just joined the team, which is essential to keep up with the times and to read and embrace the fast-changing languages linked to digital culture.

Today we want to re-launch our reality without focusing on a single major project: Shape is not only the ROBOT Festival, but also many other initiatives that are proposed throughout the year!

We like to think in terms of virtuous sharing, with exchanges and artistic residencies that go towards the model of culture that we would like to pursue. A culture that dialogues, open and flexible to collaborations, but always focused on electronic music and digital arts.”

“On stage” work then, but also training.

[E.]: “Of course! We have started a series of collaborations, including one with the MASTER in music communication and production at the University of Bologna. With ROBOT we go to the classrooms to tell about our work and at the same time we welcome an intern who will support us for a few weeks in the development of our activities.

Another project is the one in collaboration with IAAD, Institute of Applied Art of Design, which will hold an in-depth study during the next edition of the festival focused on the organization of cultural events in times of distancing and distrust.

The festival welcomes and accompanies thesis paths by students of the Institute, aimed at proposing experimental and innovative projects in line with the communication dynamics of new technologies.

In addition, we collaborate with the Conservatory of Music G.B. Martini and its School of Electronic Music.

Together with Coderdojo and Il Giardino Segreto we are also implementing our format RBT Kids, the training module of ROBOT that offers activities designed to bring children closer to the world of digital.

In short, we have no shortage of ideas to work on.”

Which are the artists who have influenced you the most in your growth path and who have inspired you?

E.]: “Since I’m in charge of curating and organizing, I don’t have any real reference artists, but music is undoubtedly a fundamental element in my growth path. If I have to name the group that represents me the most, I would choose Sonic Youth, a band that I also link to the period when I moved to Bologna from Veneto and to my first years of university. I have often seen them perform live, like during my trip to New York in 2008, when I attended a memorable concert of theirs at McCarren Park Pool.”

After an hour of chatting, you’ve earned your last question. If you were a song, what would you sound like?

[E.]: “I’m going to surprise you, but I already am! My partner Marco Ligurgo, aka Marco Unzip, created the duo ToCo with his friend, the German producer and dj Tobi Neumann, and a few years ago they dedicated a track to me called “Sweet Elisa”. I feel it mine, 100%!”

ROBOT FESTIVAL: international festival of contemporary electronic music and digital arts that promotes, since 2008, avant-garde art forms and their relationship with tradition through sound, performance, multimedia installations, lectures and screenings – ROBOT is among the most recognized European events in the field. Features of ROBOT the relationship with the territory, the use of prestigious locations in view of promotion and international exchange, connected to the circulation of new emerging artists.

ROBOT NIGHTS: is a series of events developed in different locations of the city of Bologna, with the idea of hosting artists in line with the festival.

TERRACE: a series of appointments in the beautiful setting of the terrace of the Teatro Comunale di Bologna and Sala Maggiore Ex-GAM, designed to create an ad hoc setting and give space to emerging national and international artists.

TEXTURES: events that revive in the evening, at unusual times and contexts, the beautiful spaces in front of the Museum of Tapestry in the garden of Villa Spada, and the garden of Baraccano.

BOILER ROOM Bologna: Live streaming event par excellence of international electronic music, for the first time hosted in Bologna in 2019 by Shape – Robot Festival in the beautiful setting of Palazzo Re Enzo.

THIS IS BOLOGNA: this project was created to map the cultural nodes of the city of Bologna, giving the public the opportunity to discover creative cells, visual experimenters, fashion specialists, explorers in the field of multimedia, even a section related to the most sought-after food & beverage. Two editions: in 2011 and 2013 in the prestigious setting of Palazzo Re Enzo and the Ex Ospedale dei Bastardini.